Ocala, Florida, is known around the world as a premier destination for the modern equestrian. The city has adopted the title of “Horse Capital of the World,” a nickname that the area has taken to with enthusiasm. It is no surprise, then, that the Ocala Paso Fino Horse Association is the second largest regional group within the Paso Fino Horse Association, making its home in the Ocala region, right in the beating heart of Horse Country. Many of the world’s most successful and renowned equestrians spend time in the area as they raise and train the world champion horses of tomorrow, and OPFHA is an excellent resource to use in getting acquainted with the area and other fellow breeders, trainers, and riders.

For the Paso Fino aficionado this area offers:

History of the Paso Fino

Queen Isabella and King Ferdinand issued the order that Columbus was to carry in his armada of eighteen ships, 20 lancers on horseback and five replacements who should be mares. The horses chosen were not considered the finest in Spain, but a variety of Berber Horse or Barb, the now extinct Spanish Jennet, and Andalusian Horse. This blending of breeds produced a horse prized for its gait, endurance and comfortable ride “Los Caballos de Paso Fino” as it was referred to translated to the horse with the fine walk. The crossbreed served as foundation stock. The stock was used to resupply the Spanish Conquistadors. In fact, the ride is so smooth that those who have injuries, impairments, or who have been told they would never ride again, do well riding the Paso Fino.

Columbus followed the King and Queen’s orders and disembarked on the island of Borinquen at the Bay of Aguada (known today as Anasco) with 20 horses, five replacement mares, and his soldiers on a land he called San Juan Batista. Horses especially mares and mule continued to be shipped to North America from Spain and breeding facilities soon emerged in La Espanola (Santo Domingo). The magical gait of the Paso Fino was the result of crossing an ambling-gaited with a lateral-gaited horse.

Juan Ponce de Leon became the first governor of Anasco and he began to bring horses in to neighboring Puerto Rico. Over the next 500 years, the horses were bred and adapted to the island topography. The result was a Puerto Rican Paso Fino, a beautiful, surefooted, comfortable, hardy horse that was perfectly suited for the area.

Colombia, South America first saw Paso Fino horses in 1524 and the horses came to America from Colombia with a rancher. These horses were used by cattle ranchers. This second strain of Paso Finos is called the Colombian Paso Fino. The twentieth century saw a lot of change for the Colombian Paso Fino and the breed was almost lost entirely. People tried to improve on the Paso Fino, trying to make it taller and more suited for ranching. In 1947, the breed registry the Bogota of Native Paso Fino Horse Racers was created to help regulate the breed.

A Frenchman named Andres Pedro Ledru noted about this fascinating breed of horse with no traditional trot or gallop but a pace. Pace or Andadura so fluent that the eye can’t follow the movement of the legs.

In 1849, it is said that competitions were held to enhance the local horses and in 1882 the first race tracks were built. It was not long before the Spanish-American War brought Americans into Puerto Rico.

In 1898, when the invasion began, the Paso Fino was paramount to agricultural transportation in Puerto Rico.  Americans were awestruck by Don Nicolás Quiñones Cabezudo of Caguas’ stead Manchado, who would gait in town without a rider on command, they had not seen a horse who had such a smooth gait.

1927 was a special year in the history of the modern Puerto Rican Paso Fino breed, its most influential sire was born. Dulce Sueno was born in Guayama.

In 1943, a formal group with the mission to support Paso Fino horse breed was created called The Federation of the Sport of Paso Fino Horser of Puerto Rico. They established the breed registry the Bogota of Native Paso Fino Horse Racers was created to help regulate the breed. Currently, both the Puerto Rican and the Colombian Paso Fino are bred separately to maintain purity or they breed or cross bred to produce the best of the best of each strain. No matter which way it is bred, it is regulated to ensure purity of its lineage.

The Paso Fino population in the United States rose in the 1950’s and 1960’s because servicemen stationed in Puerto Rico loved the horses so much, they purchased and brought them home.  This is likely when the breed made it’s way to the Ocala, FL area.

In 1980, the Florida Paso Fino Owners and Breeders Association was born.

The Southern Regional Paso Fino Association was created a short time after.  North Central and Central Florida has the largest population of Paso Fino horses, and more Paso Fino foals are produced here than anywhere else in the country. With the 2nd largest membership, our members are a well-diversified group. We enjoy our horses to the fullest; participating in obstacle challenges, trail rides on the extensive Florida Greenway, at the many surrounding Parks or riding our pasos on the beach. 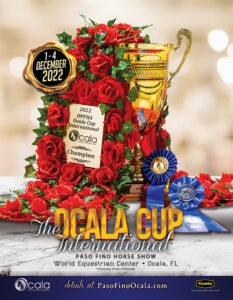 Every two years, the top horses & trainers meet. This year at the the largest equestrian complex in the United States, The World Equestrian Center. Filled with many surprises and lots of competition, The Ocala Cup International 2022 is the show you do not want to miss out on!